Home » Roadtrip » Timing is Everything »

where·with·al: resources, skills to get stuff done; means of purpose

There are a ton of National Park spots in New Mexico (basically double the amount in Texas). Not having a lot of vacation to burn, I decided to try my hand at a jam-packed weekend trip that included eight Parks. We left at midnight after our last work day and raced the sun for 48 hours, making it back home only hours before it was time for work again. Spoiler alert: we got all 8 spots!

Our first sunrise found us at Capulin Volcano National Monument. Though it’s been inactive for quite a long time, it was still pretty majestic as we made our approach. The trail was easygoing and led us straight into the middle of my first volcano!

It was amazing to stretch my legs after driving for so long, and I was glad to be treated to such a beautiful sight first thing. At the rim of the volcano, it was super windy and cold, but also offered another great view of the landscape. I almost didn’t want to leave, but I’m a stickler for a schedule (and I didn’t want to miss anything else planned for the day). 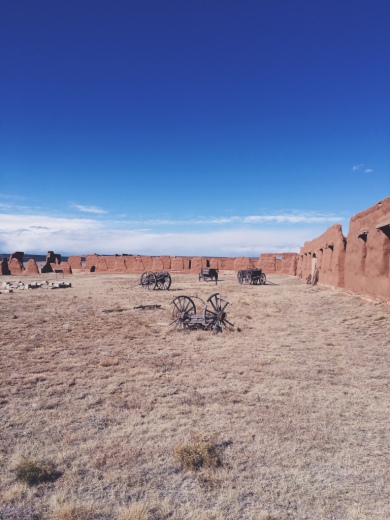 Next up was Fort Union, and while not the biggest fan of forts and battle sites, the fact that the Santa Fe Trail crosses right through it was cool to me. The buildings still standing after so many years were impressive too, especially since they were made with adobe. Also I ran into a snake right on the trail! Very cool any time I run into the wild.

Back to the car it was, and then on our way to Los Alamos, which is home to one of the major Manhattan Project sites. This park is also run by the Department of Energy. I went in thinking this wasn’t of much interest to me since massive destructive weapons aren’t really my thing, but the old Park ranger was delightful. He told us the town was built to house the scientists and their families who were apart of the Manhattan Project.

He pointed at a little empty field outside the window of the visitor center and told us that’s where the original site was. We would pass the new scientific building on our way to the next Park, Bandelier National Monument. We passed the National Laboratory responsible for working on the next rover being sent to Mars and cancer cures.

Immediately past security checkpoint gates, I was driving into the woods. The road was secluded, empty, and gorgeous. It was such a nice scenic woods drive, with just a little bit of drizzle to give the end of our day a dreamy feel. We didn’t have much time at Bandelier, but the trails couldn’t allow dogs anyway. The drive alone – funny considering we’d spent hours driving this far – felt completely worth it.

On our way out of the Monument, we spotted several deer in the trees too! There were the most is ever seen out in the wild, and were weirdly close to the road. The sun was setting and we idled on the side to watch a family of deer lazily pick their way through the woods. Then Jenna’s dog, Florence , started barking like crazy after spotting them and they fled. It was great! 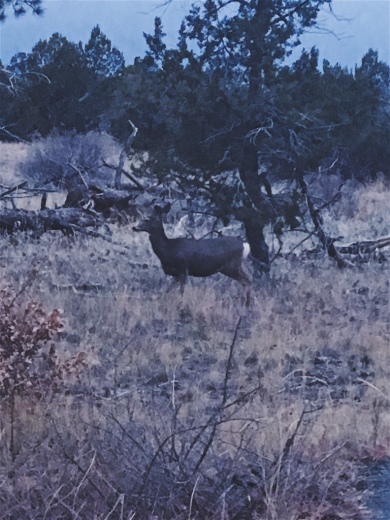 It was a tough goal, but this trip taught me a lot on how to plan an efficient road trip (for the first time I put gas and food stops into the schedule). I also learned that no matter how much beforehand research I do, it’s hard to really know what will catch my interest when I’m there. Some of the places I’d planned to spend little time at, I’d wished I had longer and vice versa.

As always in life, it seems there’s never enough time to see and do it all! I’m glad to be using my own time wisely!